Well, dear faithful blog reader(s), let's continue our story. I'm typing this on the road, having driven about 10 of the 16 wheelhours required to move to Duke University for my last semester of law school!

Actually, let me tell you about where I'm staying tonight, because it's pretty awesome. I don't mind long solitary car trips that much at all, except that sometimes I get stiff sitting in more or less the same position for hours and hours and hours. But the scenery is gorgeous, and it's excellent thinking time.

Often I write up a little list of topics to ponder, giving each maybe half an hour. Music off, mind-chatter still, just a nice calm driving meditation.

I wasn't going to make the whole way today, so I decided I'd stay the night at a place sure to be especially gorgeous: West Virginia. Somewhere in central Indiana (a state that took A LONG TIME to drive through) I stopped here 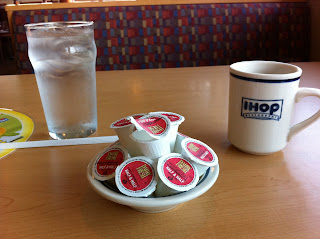 and took a moment to select my lodgings for ce soir. I wanted a motel, just off the freeway somewhere in WV, cheap. Not much is cheaper than the Red Roof Inn. $59.99 for a non-smoking room sounded great.

Then my iphone wigged out on me and I could NOT for the life of me find the place. First I went to the wrong part of Huntington, and really really really had to pee but was instead standing around a parking lot right by the river hearing Travis Tritt in live concert, echoing into the warm August evening hills.

I nearly died several times finding the actual location, so many surprise red lights and sharp turns and piled up traffic! But you know it's going to be good when it feels like a magical trek to get somewhere.

Now, I don't know about you, but when I think "$60/night motel" and "Red Roof Inn" and so on, I don't think "comfort" or "quality". More along the lines of "hopefully serviceable". But let me tell you, there is just so much RIGHT about this place!

First, the guy at the front counter, having fielded some half dozen increasingly-angsty calls patiently confirming the establishment's location, was beaming like an angel when I arrived. Chubby-cheeked Russ, he's a legend. I have never seen so many pearly teeth all smiling steady. Excellent! Happy people!

Well, the room is massive. Two double beds! And they are very comfy. I'm pretty fucking hardcore as you obviously know, and the first thing I did once I got settled here was do a 90-minute yoga session. Because you know what? This place not only has two beds, a pleather armchair, a desk, drawers and a safe, but it also has PLENTY of room for yoga.

I even could do headstand practice right there, without having to squish or turn to go against a bed or something!

Ok so that was great. Then I needed a shower. Sometimes you sort of resist going into the WC in cheap hotels, fearful of what you might find if you turn on all the lights. This bathroom is small, sure, but NEAT! Floorboards (probably plastic but they look real)!!! And one of those convex shower curtain bars that makes the shower so much more spacious! The soap smelled so good -- SO GOOD -- that I broke off a small piece to use and saved the rest for myself for another day. That's fucking RARE.

Next, the area was so clean that I actually took a bath. I took a goddamn bath in the cheap-ass motel bathroom, and it felt GREAT. Happy bday, self!!! <3 style="font-style: italic;">tasteful decor? (Given the circumstances...) 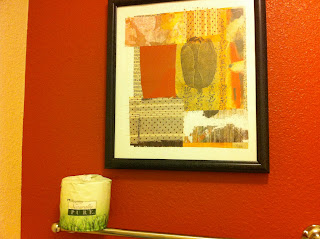 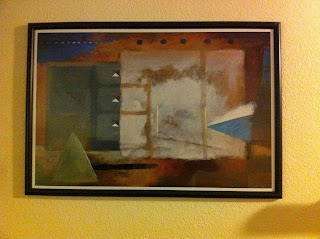 Maybe I'm delirious from driving so much, and maybe I contracted some sort of fungus or pathogen in the tub and my car is being robbed as I type, but I gotta say that this place is pretty fucking rad.

(Oh, and free wifi, need I even mention!)

A+, Would Lodge Again.

I'll get back to the frozen eggs and so on next time. Maybe. I dunno, ok here I'll just cut to the chase. Frozen eggs (still delicious -- his fridge was on the fritz): 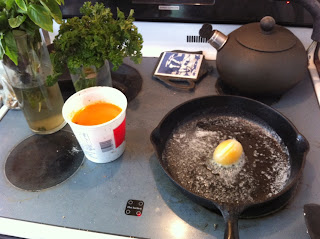 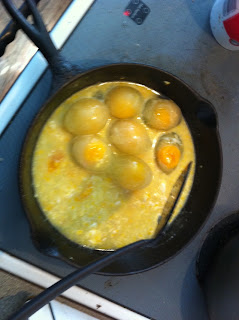 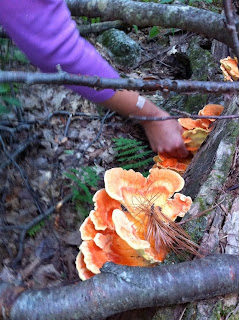 (They're called "chicken of the woods" and their texture and taste are both IDENTICAL to those of chicken. We had some with dinner.)

This post was pretty indulgent, but I guess that's what you need to be expecting during the Birthday Festival: indulgence.

Stay tuned, and try not to get any (more) neck tattoos in the meantime.
Posted by michi at 12:34 AM