My parents have a really beautiful house here. Outside of the study/office, where stray papers litter the glass-covered mahogany desk, and the bedrooms upstairs, where my brother's and my visiting possessions resemble an exploded fashion boutique, the place looks like a display home.

Everything matches. Everything is orderly. Clean. Serene. Lush.

Outside on the back deck elegant patio furniture graces a flower-lined haven, home to an oft-used large grill and several scores of paper wasps.

I've been watching them to see what they do as they mull about in the beautiful Wisconsin afternoons. Not much.

They certainly don't have any interest in pollinating, and they've never stung anyone in our household. They just seem to flit about, and when they need a break they buzz up under the benches somewhere.

Actually I lied, they do have an activity: freaking out my mother. She's not deathly allergic, but a sting would in theory make her puff up for several days and probably also hurt a bunch.

So I got down on the deck and shimmied about a bit on my back under the benches, and found 9 or 10 little wasp nests chilling out. I reported my findings to my parents and offered to remove the nests myself, that afternoon, so long as they watched me in case nature decided to reenact the end of My Girl. 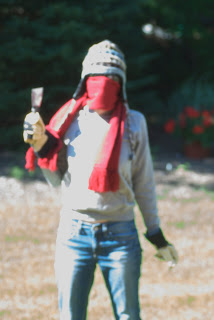 It was in the 80s (about 30°C) with maybe 75% humidity, but this was about protecting my family! ...and destroying the homes of pleasant, well-mannered members of the delicate web of life that makes Wisconsin summers otherwise so fecund and enjoyable. 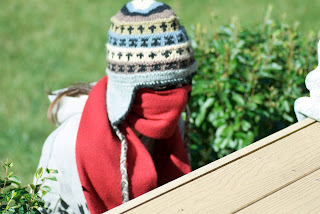 Using a paint scraper I pried every last nest from the benches' underbellies. I moved slowly after each act of insecticide so the innocent, hard-working creatures wouldn't know upon what to vent their grief and disappointment. 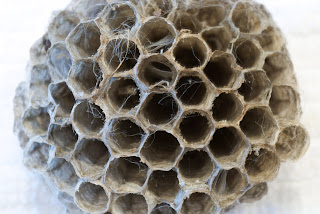 This is one of larger, unused nests. About half of the nests weren't active. Those that were active actually continued to interests the wasps, who merely did their waspian duties from the deck, right-side-up, instead of hanging from the nest, upside-down. A few hours later came a big lightning storm and lots of rain and hail, but the next day they were still using the dismounted hives, and some of the dudes were rebuilding in the same spots as where the old hives had been.

Or maybe they were just dumb and didn't notice the nests weren't there anymore.

Either way, my parents are soon going to spray the poor critters with something toxic, at which point they'll probably just move in to the benches at the house next door.
Posted by Michi at 9:19 AM