An earlier internet influence/happiness guru of mine, the fabulous Davey Wavey, writes about finding beauty in every moment, every activity, every view his eyes take in. Even things like disabused garbage cans and cloudy, thirsty Sunday afternoons. (Davey also talks about loving everyone -- most importantly yourself, being in the moment, and gay rights. Check him out!)

My drive to school is super beautiful. This is apparent even without putting on Buddhist glasses, but I try to appreciate it every time. It is about a 10-minute drive, 8 of which are through a magnificent Carolinian forest. Pictures fail to caputre its majesty: 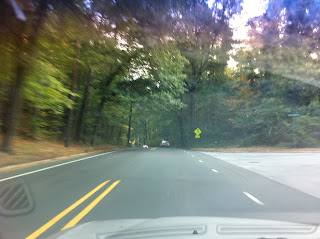 Or another example: a cicada decided to come to our back porch and lay to rest one last time. 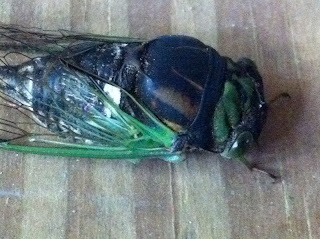 My dear friends Mac and Rocio from the last post host weekly Shabbat dinners on Fridays. Well, it's mostly Mac, who cooks a hearty, simple feast for whoever decides to join. Elijah gets a spot at the table as well. :D Mac told me just today that he only started cooking last summer! Phenomenal. He is also a singer/songwriter and plays a mean guitar. (You can just sort of see him behind Michael and Rocio on the left.) 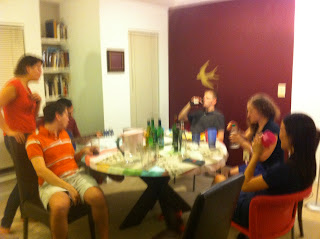 I have only been able to make it to the one dinner so far, but it lasted from 7:30 til 5am (including 6-hour dance party). So generous of Mac! We provide the wine and the company (and the hungry tummies) and he does the rest, complete with traditional Jewish chanting, candle-lighting, bread-breaking and toasting! Beautiful.

But that was weeks ago, actually. And last week was our big house party! It didn't stop Katie and me from partying up the night before, though. We went to an S-themed party with people from her part of Duke (biomedical engineering PhDs). Katie wanted a group of us to go as skittles. She's in yellow, and I'm of course the one in red. 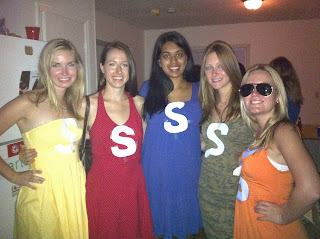 A dear friend on facebook saw another photo in this series and made a joke about "tasting the rainbow". Hahaha, very clever, CS.

Ok ok, then, after like 2 weeks of planning and 10 days of running all over town buying spirits, beer, wine, food, paper towels, etc, we had our party!!! The final facebook count said 88 yeses and a bunch more maybes. I estimate 100-120 visitors came to rock out: 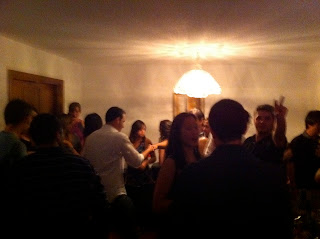 It was all rather beautiful!
Posted by michi at 6:52 PM