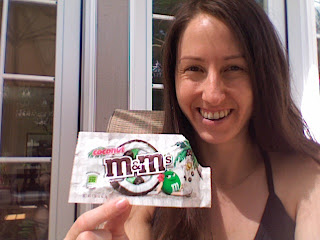 Coconut m&m's: tasty proof of America's dominance in the global fat-producing market. Personally I fail to find myself physically attracted to the green m&m, despite her white go-go boots and sassy long-lashed eyes. Good thing sex appeal is not the main part of Mars, Incorporated's advertisement campaign.

In other news I'm now on a waiting list for the iPhone. Hopefully tomorrow it'll come in, when I have a free mini-facial booked across the street from the Apple store. :D

My French foreign-exchange-sister-person invited me to stay with her in Paris during a time when I am also free, late July-early August. I spent way too many hours looking for any possible way to get there for under US$1000. Best I found was for $1060, going MKE to Newark, then Iceland Air to London, then a bus to a different London airport, then using Qantas frequent flyer miles (plus purchasing a few thousand extra) to get to Paris. It was something like 36 hours each way and I just sort of gave up after that. But I will find an economical way to see her within a year!
Posted by Michi at 4:34 PM